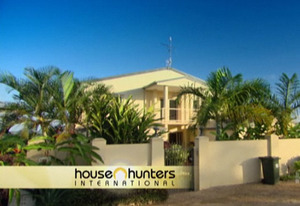 Can’t get enough of guilty TV pleasure House Hunters International? Have no fear: TV Guide Magazine has learned exclusively that HGTV just ordered a whopping 91 additional episodes of the show — making a grand total of 598 episodes produced by Leopard Films USA since 2009. HGTV airs a new episode of House Hunters International, which follows people as they search for a new home abroad, weeknights at 10:30/9:30c. “I do dream along with the viewer,” says HGTV programming executive Brian Balthazar. “I never tire of the French countryside or the dream of having a rustic place in the Italian countryside.” To produce House Hunters International, Leopard Films USA (and parent company Argonon) employs 70 staffers in New York, London, Japan and Sydney, plus a roving crew of another 70 people. That allows the show to shoot in as many as 10 locations at once. “They’re pretty much shooting all the time,” says Leopard Films USA president Nick Rigg. The show’s production coordinates crews and equipment around the world much like TV news organizations that operate international bureaus. “We obviously try and group shows,” Rigg says. “If they’re in Australia, they’ll try to shoot two or three episodes in Australia.” House Hunters International has filmed in 110 countries across six continents. The production has hit exotic spots like Mongolia and Nepal — with sherpas hauling gear and the crew sleeping in tents — but Rigg says he likes focusing on places where U.S. viewers aspire to live  — the Americas, the Caribbean and certain European countries. “This is a U.S. show,” he says. “Not everyone wants to move to Nepal, even if it’s a great story. Shows like Mongolia, those are real one-offs.” Certain locations are easier to include than others. China has been difficult to shoot in, Rigg says, while India has also been tough (particularly after Slumdog Millionaire, which Rigg says was not well-received by the country’s government). With so many episodes already under their belt, Rigg says the production has developed strong relationships with realtors all over the world, making it easier to cast the show. “They’ll have people on their books looking for homes, and they’ll feed us those people,” he says. “We also have people applying to the show, and have casting producers reaching out to different organizations, embassies and consulates in any of the target countries.” What’s the secret to House Hunter International’s appeal? “I think it’s the ability to imagine yourself in a different place and the choices you’re faced with when you get there,” says Rigg. “It’s a great show for viewing [with others]. And especially during this economic slump, it’s a bit of armchair traveling… [and] I’m always drawn into playing the game and seeing which house they want to pick.” House Hunters International is a spinoff of HGTV’s popular House Hunters<http://www.tvguide.com/tvshows/house-hunters/299333>, which has also spawned other shows, such as House Hunters on Vacation. Now HGTV is at work developing a House Hunters International spinoff centered on renovating homes around the world. The new episodic order will keep Leopard’s team in production through summer 2013. But Rigg sees the show continuing long after that. “As long as people are moving, and moving to interesting places and have interesting stories to tell,” he says, “I think the show will have a life.”