The Great Pyramid of Egypt may be humanity’s most astonishing achievement – a skyscraper of stone built without computers or complex machinery. This super-sized tomb has fascinated historians and archaeologists for centuries – but exactly how the ancient Egyptians finished the monument and fitted its 2.5 million blocks in just a quarter of a century has long remained an enigma.

Today the secrets of the pyramid are finally being revealed thanks to a series of new investigations. 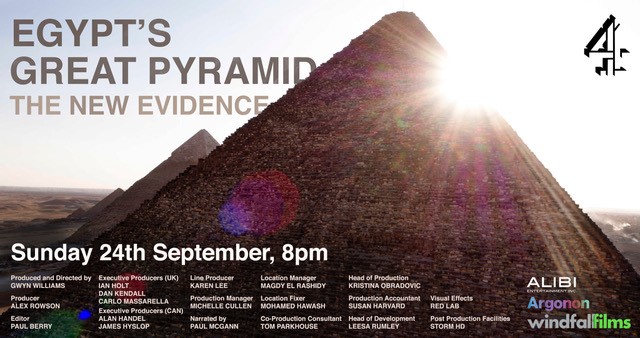 At the very foot of the monument, archaeologist are uncovering the last surviving relic of the pharaoh Khufu whose tomb it is – a huge ceremonial boat buried in flat-pack form for more than 4.5 thousand years. It’s a clue that points to the important role that ships and water could have played in the pyramids’ construction.

Egyptologists have now unearthed the most ancient papyrus ever found – the journal of a pyramid builder, lost under the sand for more than 4500 years. Decoding the text exposes the work of a man called Merer who was tasked with shipping thousands of tons of stone to the construction site.

Now one archaeologist wants to put all the new evidence to the ultimate test and recreate Merer’s boat using ancient techniques gleamed from Khufu’s ship. He wants to discover how it could carry such huge weights and cope with the Nile’s currents. Experts will also reveal how sailors like Merer harnessed the flood waters of the Nile to fill an incredible network of man-made canals that would bring their vessels far closer to the pyramid site.

But pyramid blocks were also transported over land and another expert will face the task of hauling a huge pyramid stone overland to the pyramid face using the Ancient Egyptians’ system of tracks and rollers.

Investigations reveal how the waters of the Nile were important for more than just transport. An ancient building reveals how the pharaohs supposed control over the Nile gave him power over his workers and help to persuade them to dedicate their lives to building his giant tomb.

Meanwhile, archaeologists working at the pyramid are discovering that the ancient workforce may not have been an army of slaves as has often been thought. Astonishing clues expose how the builders of Khufu’s monument lived and what they ate.

Using immersive CGI the extent to which the ancient Egyptians utterly transformed the landscape is revealed in unprecedented detail. The use of stunning aerial drone footage and dynamic experimental archaeology makes this a portrait of the pyramid – and the people who built it – like never seen before.

This film follows investigations revealing just how strong the link between pyramid and boats really is. It’s a story of more than just how Egypt built a pyramid – it’s about how the innovations that surrounded pyramid building itself helped transform Egypt and shape the modern world.